I got to attend Beyoncé and Jay Z’s “On The Run II” tour at MetLife Stadium, here are the ten best things about the show:

As tours have become longer and more ambitious throughout the industry, interludes have become increasingly common. At “On The Run II,” Beyoncé and Jay Z utilize interludes to create and solidify a storyline. Brawls in Jamaican barbershops and baptisms in pools, burning houses and fiery arguments, and home videos ranging from R-rated to PG accentuate different sections of the tour. The interludes become more than placeholders in between costume changes at “On The Run II,” they help string together songs from both artists’ discographies into one, fluid two-hour narrative. Lastly, the interludes are incredibly well shot. When taken as a whole, the interludes elevate OTR II from a tour to a pseudo-performative art showcase. Bey & Jay are elevating the game as per usual.

Now, the Beyhive have given Bey a lot of flak for the costumes on this tour. In actuality, both and Bey and Jay have incredible costumes on this tour. Decked out in Gucci bodysuits and face masks, holographic Balmain coats, Peter Dundas capes, and custom Givenchy gowns, Beyoncé looked stunning throughout the whole night. As the costumes changed in tandem with the music, gowns for ballads and bodysuits for uptempo tracks, the looks were absolutely jaw-dropping. On the other hand, Jay definitely rivaled his wife in the costume department. Fitted in Givenchy tuxedos and Yves Klein bomber jackets, Jay looked incredible. Most importantly, is the symbolism; the best costume of the entire tour is the bulletproof vest Jay Z wears during “99 Problems.” Glean from that what you will.

No one rides harder than their fave than the Beyhive. At On The Run II the fans were nearly as entertaining as the headliners. From self-designed costumes to nearly perfect choreography execution, the Beyhive put on their own version of On The Run II in the audience.

One of the biggest misconceptions about hip-hop tours and large productions like On The Run II is that the band is treated as an afterthought. This could not be further from the truth. The middle screen opens up with three levels of platforms holding different pieces of the band. But that’s just the beginning, Beyoncé does a vocal battle with her guitarist center stage, there’s an entire interlude dedicated to watching the bassist and bongo player, and there are live violinists to score some of the video interludes. Beyoncé even includes the live brass instrumentaion that made her Beychella performance so special. The band is just as important as the headliners at On The Run II, as they should be.

Beyoncé’s meticulously chosen back up dancers have always been incredible, they could headline their own tour if they wanted to. On OTR II the dancers showed their versatility more than ever. There were break dancing spots, HBCU-influenced step and line routines, and even contemporary pieces set to Nina Simone’s “Four Women,” right before “The Story of O.J.” The dancers were yet another vital piece to this incredible show. Whether it was classic Beyoné choreography or something completely different, they left the audience in awe.

For parents of three young kids and two-hour show, Beyoncé and Jay’s energy is absolutely unmatched. Even when she’s not singing, Beyoncé is moving around. Their banter with the crowd and unchoreographed moments were some of the best moments of the show. The real source of their energy comes from the two’s synergy. They feed off each other in such a particular way that the results multiplies across the stadiums. Each movement is exact and made with intent. The times when the energy bubbles over like during “Public Service Announcement,” “Clique/Diva,” “Mi Gente,” or “APESHIT,” are absolutely priceless. Even during the slower songs, there is so much passion from both Bey and Jay that the ballads don’t feel like duds, but more like a natural progression of the show.

At first glance, one wouldn’t think that Jay’s 13 solo albums and Beyoncé’s 6 would have much overlap outside of their collabs, but this tour’s setlist is killer. A lot of the setlist was recycled from the first On The Run tour but everything sounds better with the inclusion of the live horns and tracks from Lemonade, 4:44, and EVERYTHING IS LOVE. The “Perfect Duet” and “Young Forever mashup is a tearjerker, “Crazy In Love” into “Down 4 My Niggaz” and “Freedom” is an unmatchable rush of energy, and “Beach Is Better” into “Formation” literally makes the stadium shake.

It was going to be hard to top the 360-degree stage of the 4:44 tour or the groundbreaking monolith from the Formation World Tour, but somehow The Carters did it. The OTR II stage consists of three massive screens that split apart to reveal the band. There are also two runways that extend into the crowd; Beyoncé and Jay-Z start on the main stage together and then go down a single runway for their more somber and emotional songs. The two eventually get back together on the main stage, which partially lifts and floats over the audience section called, “Club Carter.” It’s an elaborate stage design that only elevated the “wow” factor of the tour.

Beyoncé’s vocals have been consistent and healthy for almost twenty years now, and On The Run II was no different. Whether she’s digging into her inner rock star on “Don’t Hurt Yourself” and “I Care,” channeling her balladeer persona on “Young Forever” or “Perfect Duet,” or ripping into her perennial ballad, “Resentment.” Beyoncé’s voice anchors the tour. She switches from sultry to churchy at the drop of a hat and truly defines what a vocalist is. 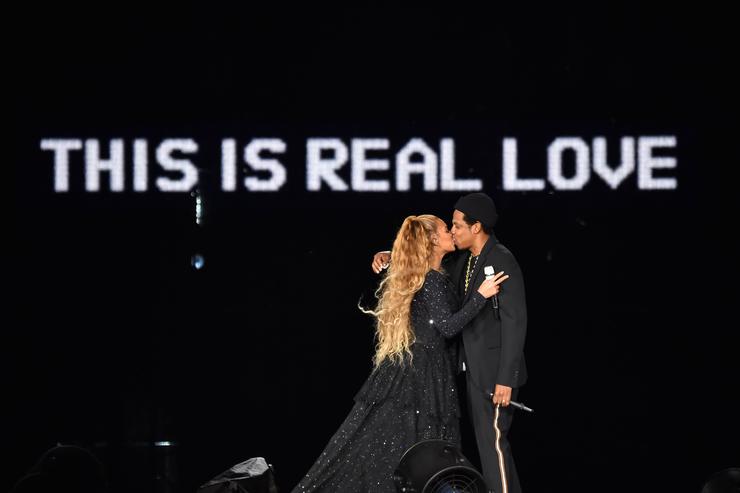 Whether you saw the first On The Run tour in person, caught the HBO special, or watched clips online, while the show was technically amazing, it felt cold. There was a noticeable lack of chemistry between the Beyoncé and Jay. At On The Run II, you can feel their love pulsating through every nook and cranny of the stadium, You can feel the love when they’re lost in each other’s eyes and the music, it’s the most beautiful thing watching them open and close the show together, hand in hand.

*all photographs belong to their respective copyright owners.