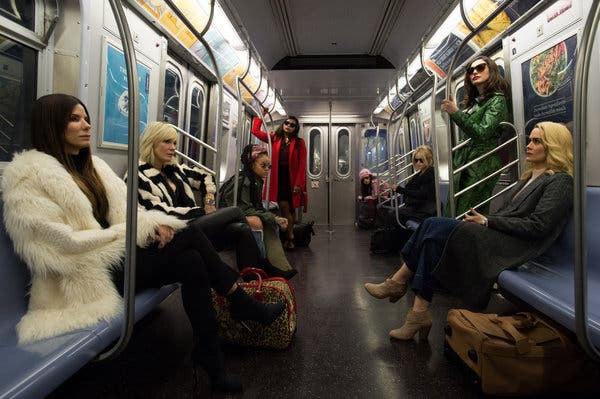 Ocean’s 8 is the perfect summer movie. Given the cast (Sandra Bullock, Cate Blanchett, Anne Hathaway, Helena Bonham Carter, Rihanna, Mindy Kaling, and Awkwafina) and the iconic franchise (this is an all-female remake of the original in which George Clooney starred), this movie had no choice but to be enjoyable at the very least.

The plot is fun: Danny Ocean’s estranged sister, Debbie, assembles an all-female crew to pull off a massive jewelry heist during the MET Gala. Sandara Bullock plays the role of Debbie with an incomparable ease and a coy, knowing smile. Her second-in-command, Lou, played by Cate Blanchett, is all leather and all spunk, she stole every scene she was in. Another scene-stealer, a movie-stealer as a matter of fact, was Anne Hathaway. In her first feature film role since 2016’s Colossal, Anne Hathway perfectly played the secretly smart airhead, Daphne Kluger; her comedic timing was always impeccable and she was the single best part of the film. Other highlights included Helena Bonham Carter as the nutty fashion designer, Rose Weil, and Awkwafina as Constance, the nifty pickpocket. Of course, we can’t forget the inimitable Rihanna, who nailed her role as the Bajan hacker, Nine Ball.

In terms of filmmaking, one interesting choice the director, Gary Ross, made was a weird Flipgram-esque montage of pictures that foreshadow the next scene. I wasn’t a fan of the choice, as I found it a waste of time and space, and made the film feel cheesy. Another intriguing choice was the decision to include real celebrities in the MET Gala scenes; some celebrities got nearly triple the amount of screentime as others and it was achingly noticeable. My last gripe with the film was the meaningless subplot of the “vindictive and vengeful ex-lover” that, in my humble opinion, completely undermined the concept of an all-female heist film like Ocean’s 8.

Overall, the film was close to two hours of solid comedy and great wardrobe; the perfect movie to kick off the summer. I recommend you go see it if you’re looking for a fun film.